Paying Directv to watch the Dallas Cowboys, even though they are broadcast for free on a major network… NO MORE!

There is a leach on your budget.  He is there every month and he has been there for so long you forgot about him.  This leach has slowly sucked some serious cash away from you month by month.  You think you can’t live without him, but you can!  It’s your cable service!  Enter DIRECTV (AT&T, or whatever company they purchase next to save themselves), Mediacom, Dish Network, and your local small town cable service.

Whether you love your cable service or love watching television I am almost certain you hate the contracts you are forced into and the always increasing bill that accompanies them.  The lowest I could get my bill down to after being out of contract was $68 ($816 a year) with the peak bills reaching around $150 ($1,800 a year).  Seems like a small expense that seriously adds up over time.  After a five year time period the amount of money you could have put towards something more important would equal $4,080 and $9,000 respectively.  There are several things you could do with an extra $1,800 a year.  In my case I have children and a goal of paying for their higher education.  Lets say I cut the cord (which I did) and put that money into an education savings account… ESA with Charles Schwab.  Using the same Asset Allocation I use for retirement investing and solely using Index Funds, I could put $1,800 a year into the ESA.   Assuming a conservative annual rate of return of 8%, after 18 years I could have $72,803 in an ESA for my daughter’s higher education.  I decided that giving my daughter a debt free start to her adult years was more important than the AMC shows I loved so much (Mad Men!).  If an ESA or 529 college savings is not your motivation or goal no problem, what about a Roth IRA or simply putting more money into your retirement accounts!

I like watching television.  From great shows to watching the Dallas Cowboys, I always assumed I NEEDED cable.  DIRECTV was there and I thought I NEEDED it.  I had paid the promotional rate for one year, higher rate for the second year, and then called every year after that to get my cost down.  What fun it was to call and argue with someone about the price of their service and threaten to cancel.  I have a hard time paying more than what a new contract holder would pay their first year.  This was an annual pain in the rear… bill went up $50 a month, time to call threaten and argue.

I finally got sick of this.  Every financial guru I was reading or listening to was SCREAMING “CUT THE CORD.”  But I thought I NEEDED DIRECTV!   So I came up with a number that I was satisfied with paying for DIRECTV.  I called their customer service and threatened to cancel since my bill continues to go up significantly each year unless I call.  I found out this time that maybe they were just as sick of me calling as I was sick of them!  “Your service will be cancelled as of midnight tonight, is there anything else you need?”  CRAP!  I hung up and sat quietly for a moment… I have no television… what do I do now?

If you have a smart TV you’re golden!  Two out of the three TV’s I have are not so I purchased two Apple TVs for $179 a piece.  Well worth the money and my family is all on an Apple ecosystem so it was a no brainier for us.  We love the Apple TVs, I would highly recommend.

Some other devices that are worth looking into and more cost effective:

Amazon Fire Stick, starting at $39 (on Amazon click the picture)

More than likely you already have a streaming service like Netflix or Hulu.  We chose Hulu because it has more current television shows.  Hulu has current episodes less than a day after they air.  Enter my wife’s “This Is Us” obsession.  But Hulu also has some really good content… like every Seinfeld episode!  Yada yada yada… we went with Hulu!  Hulu cost = $7.99 a month while Netflix cost = $7.99 to $13.99 a month.

There is no planet I want to live on where I cannot watch America’s Team THE Dallas Cowboys!  Therefore, I had to find a way to have the major networks and live television.  Turns out you can get it monthly… for FREE!  You can check how strong a signal you can get by going to the FCC Website.  They make some very good indoor antennas (not your old rabbit ears) but I did some research and came up with what I found as a highly rated outdoor antenna.

It was relatively easy to install and the picture and audio was just as clear as if I still had Directv!

I built a theater room in my basement for watching the Dallas Cowboys and movies so I didn’t have to spend an arm and a leg to go to the cinemas.  But I needed to figure out a way to get the antenna television service to each TV without running coaxial cable all over my house.  After doing some research I came across the HD Homerun, and a homerun it was!

This little guy takes the coaxial from your antenna and then sends the signal through an Ethernet cable to your internet router, and just like that it sends the signal to your smart TV, streaming devices, and even your computer/phone!  No monthly service just the equipment.  I literally downloaded the Homerun app on my phone and immediately had 32 channels coming in from my RCA antenna!

To make things easier I found the Channels App for the Apple TVs I purchased.  A one time purchase of $25 synced up both Apple TVs and I can’t say enough good things about this app!  It creates a guide just like you’re used to with Directv, you can pause/rewind, and it puts channels into a tile pick list of whats on.  It’s downright awesome. 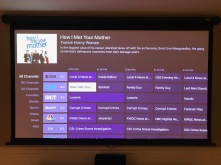 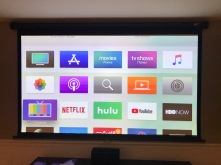 But WAIT!  You didn’t think Directv or any other company was going to let you off the hook that easy did you?  They called me everyday, sometimes multiple times for over a month!  I finally started blocking their calls.  Then the letters started to come promising $300 dollar vouchers if I would only come back and sign another contract… NO THANK YOU!

Yes Directv/AT&T… I’m sure you do!

If you do decide to cut the cord, or you already have, you’re in good company.  When I dropped off all Directv equipment to my local UPS Store the lady rolled her eyes!  I didn’t understand what I did until I looked past her to their counter…  stacks upon stacks of Directv equipment.  I asked her if she gets these drop offs very often, she turned around, pointed to the counter and said “that is just this week.”  Now I understood the eye roll!

One thought on “Cut the cord! Put the savings towards something more important…”